For over 155 years Historic Diamond Caverns has offered tours of Kentucky’s most beautiful cave. Intricate drapery deposits line the halls with thousands of stalactites, stalagmites and flowstone deposits throughout the entire tour. Knowledgeable guides explain the unique geology and fascinating history of the cave during the one hour long guided tour. The cave is presented by a state-of-the-art lighting system with modern concrete trails and safety hand railings throughout. Browse the caverns gift shop featuring Kentucky Collection crafts, rocks, minerals, fossils, souvenirs, books and more. 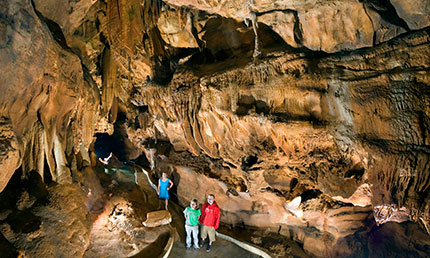 The American Cave Museum is a self-guided museum with two floors of exhibits dealing with caves, groundwater and pollution. Guided tours descend 150′ underground. View the remains of a turn of the century hydroelectric system, walk above the Hidden River and witness awe-inspiring chambers.

Cave tours last 45-60 minutes and are scheduled upon visitation; roughly 45 minutes apart. Reservations not required. Visitors descend and climb 230 stairs and navigate an outside trail. Group rates are available for groups of 10 or more. 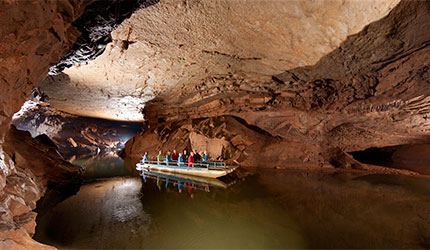 Kentucky Down Under Adventure Zoo

Kentucky Down Under is an interactive educational Australian themed Animal Park & beautifully decorated cave, Kentucky Caverns. Visitors participate activities including hands on contact with Australian animals. Where else can you hand-feed colorful lorikeets in a walk-in Aviary, help with the chores at the Woolshed, meet a Kangaroo at the Outback, learn about Aboriginal culture, mine for gemstones and much more! 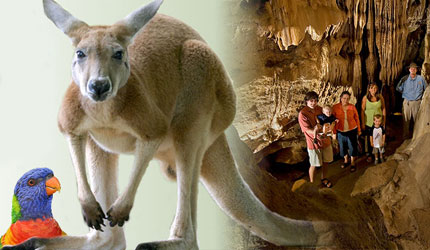 Lost River Cave has one of the largest cave openings in the Eastern United States. The cave has a long rich history including Native American Indians, Civil War encampment, power generation, milling and “Underground Nite Club”.

A Tour of the Cave and Valley includes a 20-minute Historical River Walk to the Cave opening emphasizing history, geology/hydrology, and folklore; followed by a 20-to-25 minute Boat Tour into the cave. The boat tour enables the visitor to view the large rooms of the cave and its other interesting features.

Mammoth Cave National Park was established to preserve the cave system, including Mammoth Cave, the scenic river valleys of the Green and Nolin rivers, and and hilly karst terrain typical of south central Kentucky. Beneath the sandstone-capped ridges of Mammoth Cave National Park lies the most extensive cave system on earth, with over 400 miles of passageway mapped and surveyed. And yet after 5,000 years of intermittent exploration, the full extent of this water-formed labyrinth remains a mystery. Join us on this journey. 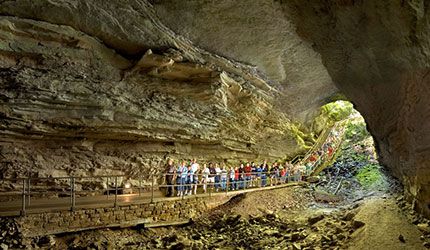 Visitors will marvel at the beautiful onyx formations found in the underground chambers of Kentucky Caverns. The leisurely cave tour features stalactites, stalagmites, and other formations created by water and time to effect an incredibly beautiful underworld scene. Included as a part of Kentucky Down Under Adventure Zoo. Guides welcome questions and conversation during a 45-minute tour in a comfortable and constant 60 degree F setting.

Mammoth Onyx Cave – open year-round, Kentucky Down Under – open mid-March through October 31st.  I-65 at Exit 58 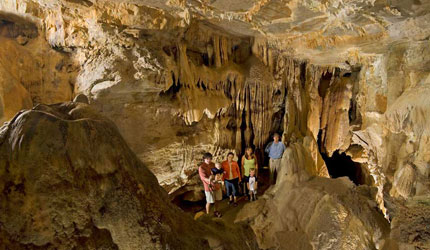 Onyx Cave is a colorful cave nearly everyone can enjoy. Guided tours are about 30 minutes long, with few steps. The Cave is a cool, comfortable 60 degree temperature, year-round. Beautiful onyx formations can be seen throughout. Tours of Onyx Cave are not strenuous and may be enjoyed by young and old alike, but unfortunately we are not handicapped accessible. Cave tours start often (on demand) and are conducted by very efficient, knowledgeable guides. Bring your camera and save the special memories of your Onyx Cave tour

Open Seasonally I-65 at Exit 53 – Across from Dinosaur World 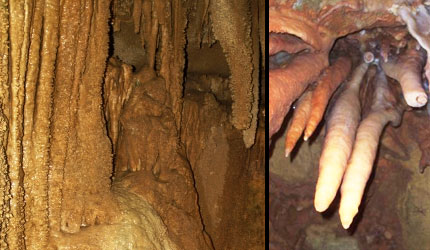 OUTLAW CAVE offers a 35-minute non-strenuous, guided tour filled with beautiful stalactites, stalagmites, flowstones and other breath taking formations. Area legend has it that famous outlaws such as Jesse James, hid out in OUTLAW CAVE and as well as other area caves. A tour in OUTLAW CAVE is perfect for the whole family, where its short length, few stairs, and affordability makes it easily accessible to all. OUTLAW CAVE offers a lantern tour daily as well as normal tours. Outlaw Cave is part of Kentucky Action Park and Jesse James Riding Stables. 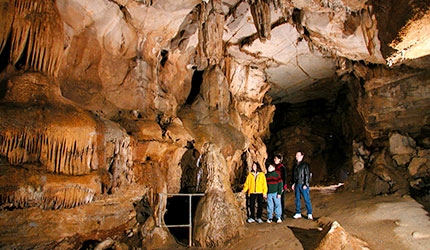